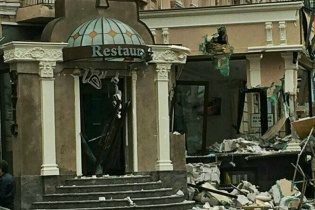 Probably, the “robbers” did not like the illegal extension in front of the restaurant.

In the night of Tuesday, October 11, in the center of the capital , unidentified persons vandalized the restaurant is “Device”.

Perhaps, the unknown is not like illegal extension Foundation on the sidewalk.

We will remind, recently the suspects in the massacre of the Russian banks have confirmed that this year on February 20, they threw stones and broke inside the branch “Sberbank of Russia” and “Alfa-Bank” in the center of Kiev.

The court questioned four witnesses in the case of the massacres of Russian banks and the office of Rinat Akhmetov. They confirmed that on 20 February this year, the activists of the OUN battalion threw stones and smashed inside the offices of “Sberbank of Russia” and “Alfa-Bank” in the center of Kiev. And only one witness remembered that the stones were thrown, one of the leaders of the OUN Nicholas Kochanowski. The second defendant, Belarusian Vasil Parfiankou, remembered only in the short episode of the pogrom.