A betrayal or a misunderstanding? The delegate of Ukraine in PACE has justified the controversial words Hollande 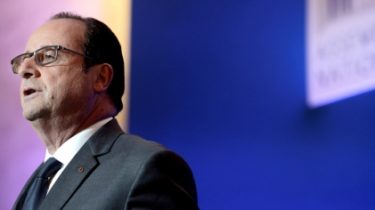 A betrayal or a misunderstanding? The delegate of Ukraine in PACE has justified the controversial words Hollande

The participant of the hearings noted that nothing worthwhile emotional response, the French President said.

The President of France Francois Hollande at the parliamentary Assembly of the Council of Europe has angered the Ukrainian politicum. Many of them have heard of “treason” in the words of one of the leaders of “Norman Quartet”, says the story TSN.19:30.

The increased reaction to the response of the Hollande Lithuanian delegate regarding the resolution of the conflict in the Donbas. “The goal of the Minsk agreements – the world. The main goal is the unity and territorial integrity of Ukraine. And this should hold elections. We need a process and in this process, the Ukrainian government must regain control over its borders. There are several stages in this process, and each must be respected. First, this cease-fire, security, disarmament, and then the election. This process must involve both the Ukrainian and the Russian parties, as it relates to the Eastern part of Ukraine,” said Hollande.

Dealt with it, particularly when we need to hold elections in the occupied Donbas. Many Ukrainians heard “zradu” in the words of one of the leaders of “Norman Quartet.” Meanwhile, members of the Ukrainian delegation in Strasbourg, who had heard Hollande’s live, convince, nothing new French President said.

Ukraine is defending the view that elections can take place only after the control of Kiev over the border is restored. Disagreement with Hollande on what selection can precede the resumption of control over the border, stated the Minister of internal Affairs Arsen Avakov. Followed criticized the French President and other government officials, for example head of administration of the Donetsk oblast Pavlo zhebrivskyi.

But the PACE delegate from Ukraine Oleksiy Goncharenko, who was present during his speech, Hollande believes that there is nothing deserving of criticism, the French leader said. “You know, I saw that Ukraine is a reaction – almost a betrayal. I don’t agree with it. I heard from Hollande – first security, then politics. It is the Ukrainian position is that we stand for. That it is impossible to hold elections while there are not disarmed and not withdrawn Russian mercenaries, yet there is no law enforcement system. This is important,” he said.

Read also: Hollande wanted the elections in Donbas without control over the Russian border

That meant the French President, speaking about disarmament, not clear to the end. If we are talking about the experiment, which the OSCE is trying to hold on to the Donbass, then he goes with difficulty. Petrovskoe village is the only place where troops still lit. Were not shooting for 5 days. But the situation on other fronts has escalated. And that the Russian-terrorist forces to sabotage the process. “They do not want to withdraw, they don’t want relief and you feel it. They say one thing and do another. We need to be ready,” – said the Deputy head of the General staff Sergei Bessarab.