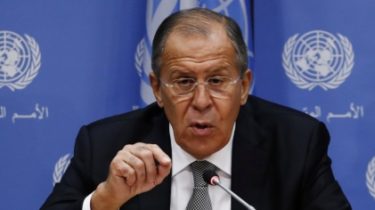 Russia does not intend to aggravate the current “cold” conflict with the United States.

Moscow is not going to fight with US or to take Aleppo, Syria, in the interests of the army of Bashar al-Assad, said the Minister of foreign Affairs of Russia Sergey Lavrov.

According to Lavrov, Russia does not intend to aggravate the current “cold” conflict with the United States.

“I don’t think so. We have absolutely no such intention. Of course, we hear the statements of the us military that war with Russia is inevitable. I leave it to their conscience,” said the Minister.

Read also: Kerry and Lavrov discussed the situation in Ukraine and Syria, despite the cessation of bilateral contacts

Lavrov also commented on the statement of his British colleagues Boris Johnson that the bombing in Syria can make Russia a pariah.

“Regarding stay in the right or wrong side of history, statements about whether Russia is a great country or a pariah, with all due respect, our Anglo-Saxon friends have a centuries-old tradition to decide who is the deviant country, who great country, and who is a rogue state”, – concluded the Russian foreign Minister.

RF explained why it would continue to bomb cities in Syria

U.S. Secretary of state John Kerry and his Russian counterpart Sergei Lavrov failed to reach agreement on mechanisms for the settlement of the military conflict in Syria. Moscow is confident that a ceasefire in the country only benefit the Islamists, who supposedly during this time to regroup. That is why Russian aircraft, together with the forces of Bashar al-Assad continue to bomb the city.