Ghost ship: on the Great lakes in the United States took the strange object 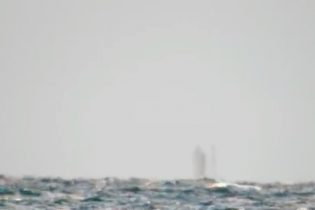 Ghost ship: on the Great lakes in the United States took the strange object

Some users theorized that the author of the video has witnessed a Mirage.

An unidentified object was videotaped on one of the Great lakes in the United States. Entry posted on 10 October on YouTube, has collected more than 500 thousand hits.

In the video titled “the Ghost Ship appears on the Upper lake”, which was published by the user from Michigan James Asselin, we distinguish two large vertical structure that resembles a tower. It is noticeable that about them breaking waves.

The video lasts exactly one minute, while the author claims that the mysterious object disappeared right in front of him. Some users theorized that the author of the video has witnessed a Mirage.

At the same time, a number of commentators have suggested that the camera captured the Ghost ship.

Recall that in Japan one by one to different cities stick boats filled with deadI.

Again, the Japanese shore the boat Ghost. Peeling faded paint, rust. These two months was 19. Some preserved flags of North Korea, more like a tattered cloth. After searching every boat find body. For twenty-five. All in poor condition, some without heads.