Near Mariupol militants fired on the Ukrainian military 380 shells. Chronicle of the ATO 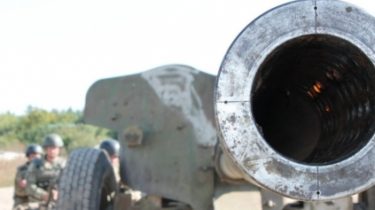 Near Mariupol militants fired on the Ukrainian military 380 shells. Chronicle of the ATO

Ukrainian artillery during military exercise© Ministry of defence of Ukraine

Over the past day ATO forces have counted 36 of enemy attacks.

In the past days, October 12, in the area of ATO in the Donbas the militants 36 times opened fire on positions of Ukrainian military.

This is stated in the summary of the press center of staff ATO as at six Thursday morning, October 13.

“In Mariupol direction recorded 20 attacks. In areas Talakivka and Novotroitsk, the enemy fired from mortars of caliber of 120 mm, and close to the Water and Shyrokyne, in addition to the mortars, infantry fighting vehicles, antiaircraft installations and small arms, the enemy used artillery caliber of 122 mm. Only on the Ukrainian positions were fired 380 shells“, – is spoken in the message.

See also: the government named the number of dead in the Donbass children

In Luhansk region there were 14 attacks.

“Near Novoaleksandrovka to strengthen the Armed forces of Ukraine came under fire from APCS, machine guns and grenade launchers of various systems, and in Novozvanivka — mortars 82 caliber”, – said the press center of staff ATO.

In the district of Donetsk was shelling out two machine guns of large caliber. It happened in the districts of Luhansk and Novgorod.

Earlier it was reported that the militants staged the ad in the village of Water under Mariupol.