In Turkey, the hungry dogs were trying to eat the car 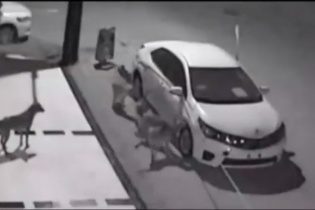 In Turkey, the hungry dogs were trying to eat the car

a screenshot of the video

The owner of the car is not going to make any complaints in connection with the incident.

In Turkey, a pack of stray dogs attacked a parked car, tore off her bumper.

About it reports “RIA Novosti” with reference to Agency DHA.

According to the records of surveillance cameras, at night the pack of eight dogs for some unknown reason, tore off the bumper and other parts from a parked car.

According to the owner, a local mechanic Jam Adjara, the total damage to his car, is about $ 1,650.

“I was shocked in the morning seeing my car in gutted form. My first thought was — that it was a robbery. But arrived I call the police on the basis of records taken from a surveillance camera, called the true culprits of the incident”, — said the Adjara.

He suggested that the attack could happen because of a cat who hid under the car.

See photo: In Kiev, in a parked car near the house found a dead man

Recall that in Scotland a parked car hovering in the air. People have noticed a Volkswagen, which drove into the roof of the Fiat. They immediately called police to find out the reason for this unusual position of the car.