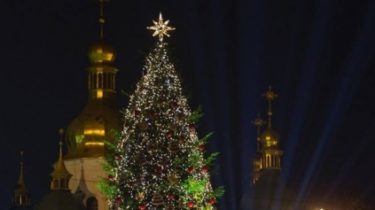 Opening of the Christmas tree is scheduled for December 19.

To celebrate the New year in Kiev will establish a 26-meter Christmas tree and organize many concerts.

This is stated in the message etnoculturala project Folk Ukraine in Facebook.

“Introduce You to one of four locations – new year’s Sofia Square! We remind you that the opening ceremony and lighting of the main Christmas tree will be held on 19 December! Looking forward to this event”, – stated in the message.

The main tree is 26 meters in height, it will beautify three miles of lights, a thousand toys, and 42 thousand lanterns.

Besides, Kiev will be entertained by concerts and carousels.

Also at the Vladimir passage 15 Dec will operate a new year-Christmas fair and the City of artists, where artists from all over Ukraine will present Souvenirs. On the same day at St. Michael’s square will open the City of Entertainment, where visitors will be able to ride on the roller coaster, the carousel, the Ferris wheel and try out the Christmas Goodies.

Read also: in Kiev celebrated the New year: impressive video from the height of bird flight

We will remind, according to rough estimates of organizers, 2016 New year on St. Sophia square near the main Christmas tree of the country met more than 70 thousand people of Kiev and guests of the city. New year’s eve on Sophia square began a concert program “New Year between the two bell towers”, in which performances of a Symphony orchestra “Kyiv classic”, academic soloists and participants of the TV talent show.