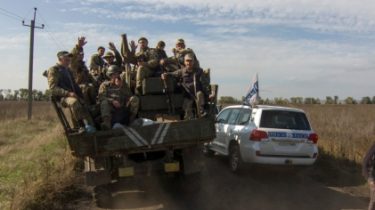 Over the past day in the fighting died in the ranks of the Ukrainian troops there.

In just the past day in the direction of Mariupol took place on 20 enemy attacks, including 14 of the heavy weapons.

On this day, October 13, at the daily briefing said the speaker of the Ministry of defense of Ukraine on ATO Colonel Andrei Lysenko.

According to him, over the past day in the fighting died in the ranks of the Ukrainian troops there, however, 7 soldiers were injured, 2 – received a concussion.

It is noted that the occupiers have again violated the silence regime in the Village of Lugansk. This suggests that the dilution of forces and means of the Ukrainian and enemy troops on this front while it is impossible.

“Major combat operations are still underway in the Popasnyansky area. The enemy is trying to push back the ATO forces from their positions, opening fire both day and night. In addition to light weapons, anti-aircraft guns and mortars, the militants twice used the APC.

Also enemy mortar attack occurred in the Crimea”, – stated in the message.

On the eve of President of Ukraine Petro Poroshenko has signed the withdrawal forces in the Village of Lugansk, which was scheduled to begin today, October 13. As the correspondent of TSN from the front, the soldiers were ready to go, Packed up.

However, at night the enemy again fired at positions in the Village of Lugansk with rocket-propelled grenades, and at 9 am there was another fire from a grenade launcher on the road, where there is a checkpoint.