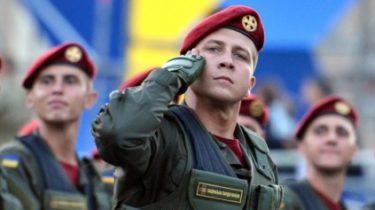 During Friday in the Donbass fired from large-caliber weapons.

On Friday in Donetsk and Lugansk regions recorded 21 cases of violations of the silence. This is stated in the regular formal report of the press center of staff ATO, which is published on the social network Facebook.

The most active rebels were on the Mariupol direction. There fire was opened 15 times. The enemy does not stop attacks from prohibited agreements weapons – in particular,the 122-millimeter artillery. Of these guns shot at Shirokino, lebedinskoye, Pavlopol and Water. In these areas, also worked with 120 mm mortars. In Marinka and Krasnogorovka the Russians and their henchmen used to attack tanks and infantry fighting vehicles.

On Lugansk direction militants occurred on 5 of the provocations of the anti-terrorist operation forces. It was hot near Novoaleksandrovka. There, the enemy used grenade launchers of various systems. But under the Donetsk was surprisingly quiet. Only once in Avdeevka a shootout erupted with machine guns, grenade launchers and machine guns.

In the House officers, the best soldiers were awarded the military ranks. Over the past three years military service were more than 200,000 and mobilized tens of thousands of volunteers. According to official data, more than 2 thousand military have died defending Ukraine from the aggressor. Their memory observed a minute of silence.