On the eve of the Day of defender of Ukraine, the militants poured APU mortar and sniper fire 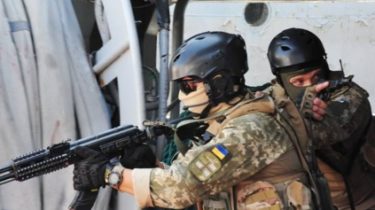 On the eve of the Day of defender of Ukraine, the militants poured APU mortar and sniper fire

Most were shot in Mariupol direction.

Over the past day Russian-occupation forces 25 times opened fire at positions of the Ukrainian defenders.

On the Mariupol direction recorded 14 attacks, the press center of staff ATO.

At Shirokino and Water fired from 120-mm mortars and cannon artillery 122mm.

On Lugansk the direction the invaders 10 times opened fire on positions of forces ATO. Armed provocations organized in the areas of Novoaleksandrovka and Luhansk. Except small arms and rocket-propelled grenades, the militants used sniper fire.

On Donetsk the direction recorded 1 attack.

In Avdiivka terrorists used machine guns, grenade launchers, small arms. In this area it was fired from mortars of 82mm and 120mm caliber.

Recall that deveryonee group of the enemy probes the line of defense near Popasnaya. Pre-firing mortars or grenade launchers APU positions, the enemy tries to come closer to Ukrainian fortifications.

After the enemy has intensified, the intensity of enemy attacks, and the caliber of the weapons that terrorists use, only increase. This week the names of the nearest to Popasnaya settlements Novozvanovka and Novoaleksandrovka do not disappear from front-line reports.