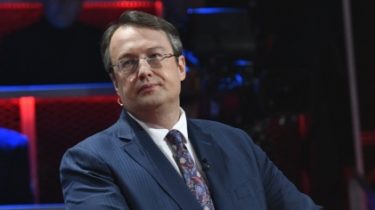 The Russian leadership other tactics to destabilize Ukraine.

Russian President Vladimir Putin is not planning any further seizures of new territories in Ukraine.

About this on air of the talk show “Right to Vlad,” 1+1, said the people’s Deputy of Ukraine and Advisor to the interior Minister Anton Geraschenko.

“We have intelligence information which confirms that at the moment in Vladimir Putin’s plan to further violent seizure of the territory of Ukraine. It do not need to, because the capture of additional territory shall bear the cost of its defense, upkeep and so forth,” he said.

See also: the leader of the militants Zaharchenko told about the aggressive plans in the Donbass

According to the Deputy, Putin another tactic to destabilize the situation in Ukraine.

We will remind, the military Prosecutor Ruslan Kravchenko called units of the Armed forces of the Russian Federation, which participated in the seizure of Crimea in 2014. According to him, military equipment and uniforms of the invaders have been prepared by masking all tactical symbols.

The adviser to the interior Minister Anton Gerashchenko says that, according to intelligence sources, the Russian President has no plans to seize more Ukrainian territory. However, a lot of effort put Putin to undermine the situation from the inside.