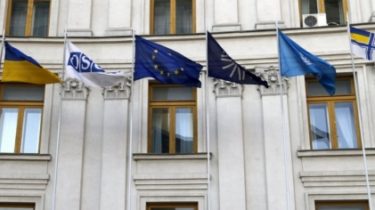 Ukrainian diplomats have demanded the immediate release of the five arrested October 13, the Crimean Tatars.

The Ministry of foreign Affairs of Ukraine expresses its decisive protest in connection with the October 12, 2016 the occupation authorities of the Crimea a series of raids on the homes of the Crimean Tatars, illegal detention and the subsequent arrest of five Ukrainian citizens.

This is stated in the statement of Ukrainian diplomats.

In the Ukrainian foreign Ministry is convinced that such actions of the Russian Federation are continuing its repressive policy aimed at intimidating the population of the Peninsula in order to suppress any manifestations of dissent, and social resistance to illegal occupation.

“RF himself inculcates terror in captured as a result of armed aggression on Ukrainian territory spreading there fear and injustice that violates basic norms of international law, democratic rights and freedoms”, – said in a statement.

The foreign Ministry of Ukraine demands the immediate release of the five prisoners of the Crimean Tatars and other Ukrainian citizens illegally held now in captivity of the Russian occupying power.

“We urge the international partners of Ukraine to strengthen pressure on the Russian Federation with a demand to stop persecution and repression on ethnic and religious grounds in the temporarily occupied Crimea”, – said the Ukrainian diplomats.

See also: Crimean Tatars explained that it gave a blockade of the Peninsula a year ago

We will remind, earlier it was reported that the Deputy head of the Majlis of the Crimean Tatar people Nariman said, and the other three members of the Majlis summoned for questioning by the FSB in the case of Ilmi Umerov.

Upside down furniture, children crying in the Internet appeared the video of the raids of the Crimean Tatars by the security forces of the FSB

Yesterday at dawn, in 5 houses, inhabited by the Crimean Tatars broke into armed masked men. After a daring searches of the heads of families, without charge, was detained. Later it became known that they are accused of involvement in “Hizb-ut-Tahrir”. It is a Muslim organization in Russia as extremist.