A day in the area ATO wounded three soldiers, one suffered a concussion 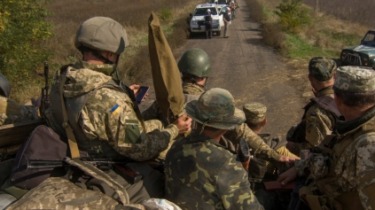 A day in the area ATO wounded three soldiers, one suffered a concussion

The speaker of the AP on ATO reported that the two dead soldiers lost their lives not because of the fighting.

For last days in a zone of carrying out anti-terrorist operation three Ukrainian soldiers were injured, one suffered a concussion.

This was announced on Saturday, October 15, at a briefing speaker of the presidential Administration on issues of anti-terrorist operation Andrey Lysenko, transfers UNIAN.

“Over the past day by fighting no Ukrainian military was killed and three were injured. Two is the direction of Mariupol, Shyrokyne and Water, and one in the direction of Donetsk near Zaytsevy. One fighter wounded. All the fighters are already in the hospitals, they have assistance,” – said Lysenko.

He also said that two Ukrainian servicemen killed in ATO area in Luhansk region lost their lives not fighting, and as a result of domestic conflict.

“Information that the Luhansk military and civil administration of the death in the fighting, two Ukrainian military is not true. We have information about the deaths of two soldiers, but it happened as a result of domestic conflict, and this is now engaged competent authorities”, – said Lysenko.

As previously reported, in Lugansk regional state administration reported that for the past day Popasna direction as a result of artillery shelling by militants killed two soldiers.