“Ukroboronprom” for two years, gave the Mat more than 12 thousand units of equipment and weapons 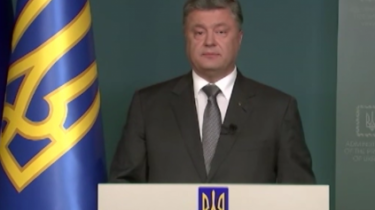 “Ukroboronprom” for two years, gave the Mat more than 12 thousand units of equipment and weapons

Poroshenko said about this during a working visit to Kharkiv region.

State concern “Ukroboronprom” for two years, transferred to the Armed forces of Ukraine more than 12 thousand units of military equipment and weapons.

This is stated in the message UNIAN.

President of Ukraine Petro Poroshenko said about this during the solemn ceremony of transfer of the next batch of military equipment and weapons the personnel of the Ukrainian military airfield in Chuguev near Kharkov.

“List of weapons and military equipment that is being transferred, includes combat and transport aircraft, missile and artillery weapons, tanks, infantry fighting vehicles, trucks, new cars and more. There are already 202 mm and 120 mm mortars Ukrainian, restored and upgraded other equipment,” – said Poroshenko.

See photos: the Day of defender of Ukraine Poroshenko noted the courage of the heroes of state awards

According to him, also waiting for their transfer by means of electronic and counterbattery.

Later in Kharkiv Poroshenko intends to take part in the meeting of activists of the region, where he will present the new head of Kharkiv regional state administration Yulia Svetlichnaya, which won the competition for the position.