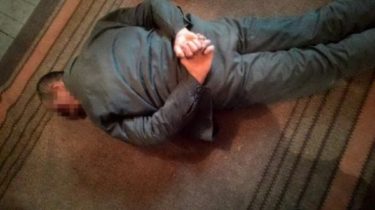 Accomplice of terrorists recruited in August.

Employees of counterintelligence of the security Service of Ukraine detained in Yasinovataya in the Donetsk region informant of the Main intelligence Directorate of the General staff of the Ministry of defence of the Russian Federation.

The man was recruited in August 2016 through the friends of the militants of the so-called “DNR”.

This was reported by the press service of the SBU.

Within two months, the informant gave the curators the data about the dislocation of divisions of Armed forces of Ukraine near the demarcation line in Yasinovatskiy area.

The accomplice of terrorists was also adjusting artillery and mortar attacks of terrorists on positions of the antiterrorist operation.

The security service of Ukraine announced the informant on suspicion of committing a crime.

Earlier, in the area of ATO was detained the informant of the terrorist organization “LNR”. According to the SBU, during 2014-2016, the woman gave one of the militants “LNR” data on the number, armament, movement and locations of the Ukrainian units in the Novoaydarsky region of the Luhansk region. During a search at the place of residence accomplice of terrorists seized the means of communication, mobile operators, and notes confirming its illegal activity.