On the Day of defender of Ukraine under fire, militants killed two soldiers 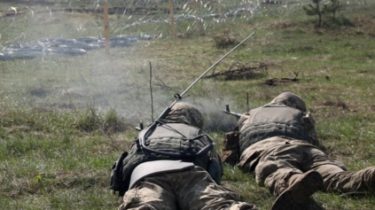 On the Day of defender of Ukraine under fire, militants killed two soldiers

Over the past day by shelling militants in the Luhansk region killed two Ukrainian visokih.

During the shelling, a local resident was wounded by shrapnel in their own home.

About it reported in Department of mass communications of Luhansk regional state administration, reports UNIAN.

Read also: Poroshenko announced how many Ukrainian soldiers were killed due to Russian aggression

The victim was operated in Popasnyanskiy district hospital. Report that threat to the life of a local resident yet.

“Yesterday, the Day of defender of Ukraine, two more of our soldiers gave their lives defending the territorial integrity of our States, and a resident of the town of Golden were injured in their own home. We pay a very high price for peace in Ukraine but keep our word, because even under heavy enemy fire guys adhere to the order and do not respond to provocations,” – commented on the situation on the demarcation line of the head of regional state administration, head of the regional military-civil administration Yuriy Garbuz.

We will remind that in day of the defender of Ukraine, on Friday, October 14, in the Donetsk and Lugansk regions recorded 21 cases of violations of the silence.

The most active rebels were on the Mariupol direction. There fire was opened 15 times. The enemy does not stop attacks from prohibited agreements weapons – in particular,the 122-millimeter artillery. Of these guns fired at Shirokino, lebedinskoye, Pavlopol and Water.