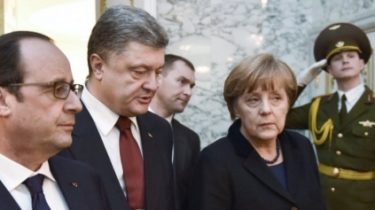 The President of Ukraine insists that Russia and its puppets should perform the safety conditions of these agreements.

About this Poroshenko wrote on his page in Facebook.

The interlocutors discussed the results of the recent consultations at the level of diplomatic advisers in the “Normandy format” (Ukraine, Germany, France and Russia).

“It was noted effective German-French-Ukrainian cooperation in developing a roadmap for implementation of Minsk,” – said the President of Ukraine.

Read also: Putin said when the time comes for the meeting, “Norman Quartet”

Poroshenko “stressed the importance of continued coordinated efforts to ensure that Russia and its puppets of the security conditions of the Minsk agreements as a prerequisite to any progress on the political track”.

The parties agreed to hold the next telephone conference early next week to determine the prospects of holding the summit in “channel format”.

The President of France stated from the rostrum of the UN General Assembly. Speaking in new York, Hollande said he plans to meet with Poroshenko, Putin and Merkel in the coming weeks. Together with the German Chancellor and Hollande has taken the initiative to enhance the implementation of the Minsk agreements.