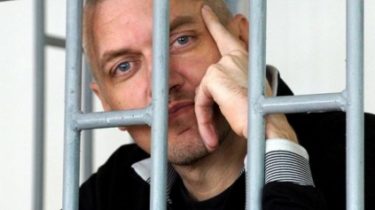 Lawyers are not against to take the team of singer Stas Mikhailov.

Lawyer Ilya Novikov on Tuesday visited the convict in the Russian Federation Ukrainian Stanislav Cliche and he agreed to Marina Dubrovina continued to defend him on appeal to the Supreme court October 26 for another case – on participation in the Chechen war, for which he was sentenced to 20 years.

About this in his Faccebook and Twitter said the lawyer Ilya Novikov.

“I’m in Grozny, just got out of jail. Together with lawyer Gakkou Iclaim we visited Karpyuk and Cliche and each of them signed an agreement on common defense. Marina Dubrovina, which Klyh refused in the case of contempt of court, will protect the Supreme court and his, and Nicholas Karpuk. We dokkoi taken in addition to the protection of Nicholas protecting Stas (Mikhailov – ed,” – said Novikov.

See also: Appeal on sentence Karpyuk and Cliche will consider at the end of October

We will remind that previously convicted in Russia, the Ukrainian Stanislav Klyh, who is on trial in Grozny for insulting the Prosecutor, suddenly abandoned the lawyer Marina Dubrovina.

Russian prosecutors demanded to put Karpuk at 22.5 years, and Klich – for 22 years. May 19, the jury recognized Karpyuk and Cliche guilty. Protection of Ukrainians are sure that the jury was pressured. The Ministry of justice said that immediately after sentence begins the procedure of extradition of the Ukrainians.

Case Karpyuk and Cliche fabricated by the Russian investigative Committee and it appears the Prime Minister of Ukraine Arseniy Yatsenyuk. Lawyer Ilya Novikov released new details about, in his words, “this sordid history.” In it Russia officially declares that in ‘ 94 Yatsenyuk was nicknamed “fighter Arsen”, fought in Chechnya against Russian troops with Musiccom Alexander, known as Sasha White, and former head of the Lviv organization UNA-UNSO Andriy Shkil and, in fact, now defendants in Chechnya Ukrainians – Karpyuk and Klahom.

Prisoner in Russia, Klich refused a lawyer and asks the defenders someone from the Russian pop-stars

This was stated by the defender of Ukrainian Marina Dubrovina. It happened during a meeting in Grozny. The defendant stated that he had received illegally over 20 years in prison due to the poor performance of his lawyer and wrote a letter of rejection, asking yourself to defenders someone from the Russian pop stars such as Justin Timberlake or Sergei Zverev. Dubrovina was convinced that the Ukrainian behaves so because of mental health problems, which were initiated as a result of torture in a Russian prison during the investigation.