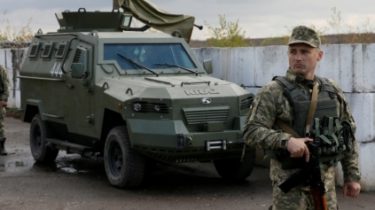 The majority of attacks recorded in Mariupol direction.

In the area of antiterrorist operations recorded 35 attacks by the Russian occupation forces.

On the Mariupol direction the enemy 30 times opened fire on positions of Ukrainian Armed Forces, most of which are heavy weapons. In the area of Lebedinsky of violations of the silence came from cannon artillery 122mm, by Shirokino and Water in addition to the 122 caliber fighters used guns of 152mm caliber, and in the direction of defenders of Talakovka and Krasnogorovka – machine guns, large caliber fire, infantry fighting vehicles, grenade launchers and small arms.

In Lugansk direction there were 4 armed provocations. In particular, from 120-mm mortars in the area of Novozvanovka in the Crimea – from small arms and grenade launchers.

On Donetsk the direction fighters 1 times fired at forces of anti-terrorist operation in Avdiivka applying at the same time an Arsenal of weapons of small caliber.

Yesterday, 17 October, militants intensified in Mariupol direction. during the day in the area of counter-terrorism operations by the Russian occupation forces recorded 18 cases of opening fire on positions of Armed forces of Ukraine.