Savchenko told why went to the occupied territories of Donbass 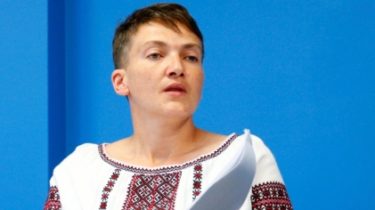 Savchenko told why went to the occupied territories of Donbass

According to the Deputy, people dissatisfied with the rule of the militants.

People’s Deputy of Ukraine Nadiya Savchenko went to the occupied territories of Donbassto track the delivery of contraband.

“It wasn’t no invitation this happened during the first three months. I’ve been tracking in the first place the way of smuggling, where they are possible, what is possible. All the information that I got, I passed on to the relevant authorities,” – said Savchenko.

Read also: Savchenko counted 245 captured Ukrainians in Donbas and sees no need for a special status

The MP says that he tracked the mood of the people living in the occupied territories. According to her, they are dissatisfied with the rule of the militants.

“I also looked at the mood of the people. The people there need help. Now they wish it was over, that the war is over. The same problems that in the whole of Ukraine, not enough money, terrible dissatisfaction with the government Carpenter. Power Zakharchenko discontent less, but there people do not want to continue to live,” – said Nadezhda Savchenko.

A former prisoner of the militants and the Russian government says it will go wherever considers necessary, if it will benefit Ukraine.

We will remind, people’s Deputy of Ukraine Hope Savchenko, speaking in the session hall of the PACE, said that he recently visited the occupied territories and talked with people who took her prisoner.