In Kiev tram stowaway threatened with the gun controllers 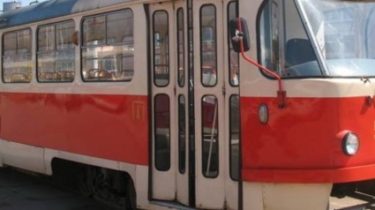 In Kiev tram stowaway threatened with the gun controllers

The young man pulled a weapon in response to a request to show the ticket.

In Kiev in the tram No. 22 the young man was threatened with a gun , passengers and supervisors.

About it reported in a press-service of “Kyivpastrans”.

“Around 14 o’clock on October 19 tram number 22, which runs along the route “the Boulevard Perov – ZZHBK” at the stop “Ul. Students.” a team of three supervisors checked the passengers tickets. After a request to show the ticket, one of the passengers – a young man pulled out a gun and began to threaten the supervisors and passengers who were in the tram”, – stated in the message.

As noted, at the next stop a guy came out of the tram, behind him came also the controllers and called law enforcement authorities, who promptly arrived on the scene and detained the hooligan.

Now he is in the Dniprovskiy district police Department, where it became clear that the offender is only 17 years old, and the gun was traumatic.

We will remind, earlier in Odessa in a shooting in the tram a woman wounded. The victim had no relation to the dispute.