Klimkin does not expect any breakthroughs from the meeting, “Norman Quartet” in Berlin 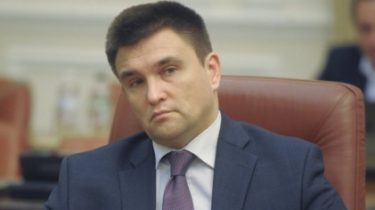 Klimkin does not expect any breakthroughs from the meeting, “Norman Quartet” in Berlin

The meeting will make it clear whether it is possible to continue to put pressure on Russia to implement the Minsk agreements.

The Minister of foreign Affairs of Ukraine Pavlo Klimkin does not expect any breakthroughs from the meeting of leaders “Norman Quartet”, which will take place on 19 October in Berlin.

“Tomorrow should be a test. Such an arrangement, since the idea belongs largely to German Chancellor Angela Merkel, but was supported by the President of France and the us, with the aim to understand whether we can continue to put pressure on the Russian leadership in the implementation of the Minsk agreements. It is obligatory on the eve of the European Council, which will discuss the issue of relations with Russia. Therefore, in this context it is very important”, – said the Minister.

Klimkin noted that work continues on the logic of the roadmap for the implementation of the Minsk agreements, “which should be dominated by a clear logic in the execution of all agreements on security and humanitarian dimension – the release of all political prisoners. Only it should overlap the execution of political agreements.”

“We are working on the project, but must understand that particular expectations in terms of any breakthrough from tomorrow’s event we have,” – said Klimkin.