Meeting “Norman Quartet” and the potential flight to the moon. Five things you might oversleep 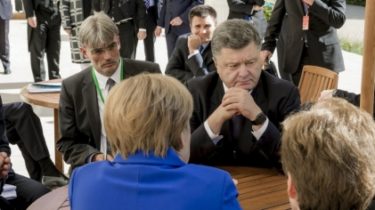 Meeting “Norman Quartet” and the potential flight to the moon. Five things you might oversleep

1. The purpose of the meeting “channel four” in Berlin would seek to promote Ukraine with the special status of Donbass. This was stated by Minister of foreign Affairs of France Jean-Marc Ayrault. The French foreign Minister noted that “Norman four” will require from Kiev “detailed obligations regarding the “status of Donbass” and of the calendar of elections in the occupied part of the region. Read more→

2. NSDC Secretary Oleksandr Turchynov congratulated on the successful launch of the upgraded booster medium-class Antares-230 with cargo spaceship Cygnus with the Ukrainian first degree. According to him, Ukraine is regaining the position of the missile state, rapidly restoring the strategic position in the rocket. Read more→

3. The militants of the terrorist organization “DNR” shelled checkpoint “Hnutove”, located 23 km East of Mariupol. This was announced by the speaker of the State border service of Ukraine Oleg Slobodyan. According to him, the militants carried out two attacks with at 20.38 21.10 PM on Tuesday, October 18. The terrorists fired about 25-30 min. 120mm. Read more→

4. Successful launch rocket “Antares” was opened for the Ukrainian aerospace industry a new perspective. A joint project with the USA has development potential up to the participation of Ukrainian astronaut in international space missions and building Ukraine’s own station on the moon. Read more→