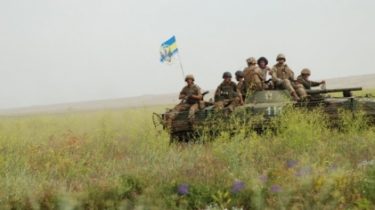 Militants subsided at the time of anthem.

On Donbass fighters began Wednesday morning, October 19, with the sounds of the anthem of Ukraine.

About this informed the press-Secretary of sector of “M” Alexander Knaster on his page in Facebook.

“Orcs are near sahanki watched the sun rise under sounds of the Anthem of Ukraine!” – he wrote.

The military has also posted a video, on which fighters included the anthem.

At the same time, from fighters not hear a single shot. After listening to the first verse and chorus, the military was out of position.

We will remind, on the eve of the militants of the heavy mortars fired at Ukrainian border guards near Mariupol. Terrorists fired about 30 min 120mm