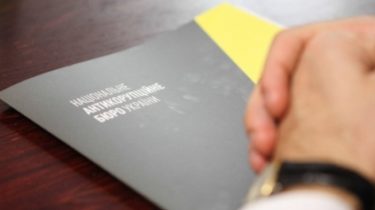 The charges surprised the suspect, who does not see in its actions of violations of the laws.

In Kiev, judged one of the leaders of the National anti-corruption Bureau that she held three training in one of the international funds. The Prosecutor’s office believes that Catherine Veselova combined posts unbelievable, and it borders on corruption, so the woman could face a large fine and dismissal, according to a story TSN.19:30.

Vezeleva in the private Foundation Friedrich Ebert read to students a course on leadership and gender equality, which has been enriched to 18 thousand hryvnias. Under the agreement, it performed the work of a coach at the event, which was to provide teaching services. At trial, a topic of contention, because 172 of the article of the code of adminnarusheniyah allows a state employee to teach. However, the GPU insist that the training is not teaching, so the official NABOO with a salary of 32 thousand hryvnias moonlighting political and educational activities.

“Lectures, which I read for young people, was aimed at achieving gender equality. I carried out this activity during off hours. In addition, I informed my direct management about where I was planning to be on holidays” – she says Veselova. Her case the court has promised to decide on October 20.

In Kiev, judged one of the leaders of the National anti-corruption Bureau

For what conduct three trainings in one of the international funds. The attorney General’s office believe that Catherine Veselova combined posts unbelievable, but this is bordering on corruption. The woman could face a large fine and dismissal.