No hope of hope. What is going and what to expect from the talks in Berlin “Normandy format” 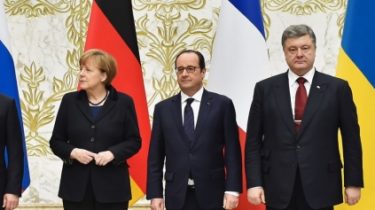 No hope of hope. What is going and what to expect from the talks in Berlin “Normandy format”

On the background of aggravation of the Syrian crisis, the four heads of state will discuss the Ukrainian question in Germany.

Yesterday it became known that the heads of “Norman four” finally come together in Berlin on October 19 – the last meeting at the level of heads of States held for a year.

Read also: Putin is in Berlin preparing to meet with protests

In the Administration of the President of Ukraine said that Petro Poroshenko, French leader Francois Hollande and German Chancellor Angela Merkel on the phone agreed to meet in order to “force Russia to fulfill the Minsk agreements, in terms of security policy”. The Kremlin protested this formulation, however, confirmed that Putin “retains the openness and willingness to negotiate”. And yet, too, travels to Berlin.

“I am quite optimistic about the future of Ukraine”

Poroshenko warned that expectations from the meeting should not be overstated.

Meanwhile, in the area of the ATO continues firing: the Kremlin-backed fighters break the so-called “regime of silence”, to destroy the settlements of the street with heavy equipment and tearing the breeding forces adopted recently in Minsk. According to the terms of this breeding was assumed to be 7 continuous days of silence, but the terrorists in the Village of Lugansk decided attacks do not stop.

Poroshenko stressed that the political conditions of the Minsk agreements, in particular, on the holding of elections in the Donbass, Ukraine will fulfill only in the case of the embodiment of the unit for security – the case of Russia, whose army is in the occupied Eastern territories.

“The package security provides complete cease-fire and the withdrawal of foreign troops from our territory, and the transfer of the first stage under the control of the OSCE, and the second – under the control of Ukraine uncontrolled part of the Russian-Ukrainian border, the withdrawal of heavy weaponry, access to the entire OSCE area,” he said in Chuguev October 15, transmitting military weapon.

Read also: Poroshenko discussed with Merkel and Hollande the progress of the Minsk agreements

According to the Ukrainian intelligence, on the territory of Donetsk and Lugansk regions are now about 7,000 members of the regular forces of the Russian Federation. 35 000 is the mercenaries who are fighting in the composition of the 1st and 2nd army corps of the Russian troops.

At the moment, they lead the troops in high degree of readiness in Lugansk, Stakhanov, Makeyevka and Donetsk. In addition, on many dimensions, there are rotation and strengthening, resupply ammunition: terrorists throw BMP, BMD, trucks and wagons with food and fuel.

It is noteworthy that last week, when the question about the meeting of “Normandy four” have not yet been resolved, Hollande at the parliamentary Assembly of the Council of Europe noted the priority of the local electionsand not return to Kiev’s control over the Ukrainian-Russian border: the Minsk agreements allegedly provided exactly this order – first the cease-fire, disarmament, and then immediately – election.

This statement has caused indignation of the head of the interior Ministry Arsen Avakov. “I tell you, Mr Hollande, don’t you dare tell us to give Ukraine millions of lives of our citizens under Putin’s regime, because that’s how you feel comfortable!”, – he wrote in Facebook. And the head of the Donetsk ACV Pavel Zhebrivsky advised Hollande to go to the occupied Donbass “carried out in these areas in the election campaign”.

Dealt with it, particularly when we need to hold elections in the occupied Donbas. Many Ukrainians heard “zradu” in the words of one of the leaders of “Norman Quartet.” Meanwhile, members of the Ukrainian delegation in Strasbourg, who had heard Hollande’s live, convince, nothing new French President said.

Meanwhile, the aggressor continues to accuse Kiev in the alleged failure of the Minsk agreements. Putin is the President’s statement about the need to implement a package of security called a reason not to fulfill the political part of Minsk agreements. And said he wants “to go, at least, in parallel.”

Russia itself, meanwhile, goes perpendicularly down: the economic and political situation in the country on the eve of important negotiations, unstable and is such that does not allow you to encroach on the position of strength.

“Geopolitical failure, Putin has intensified due to the actions in Syria”

In September, an international team of investigators Conflict Intelligence Team (CIT) announced the results of the investigation of the MH17 disaster, which was presented to the joint inquiry Commission in the Netherlands. According to them, the passenger plane was shot down by a missile from the Buk missile system that was delivered to Ukraine from the Russian territory after the accident and taken to Russia. 18 July 2014 – the day after the tragedy – he was already on Russian territory.

Geopolitical failure, Putin has intensified due to the actions in Syria. September 19 near Aleppo convoy of humanitarian convoy of the red Crescent came under an airstrike. Responsibility for the attack , the West has placed on Syrian troops and their allies – Moscow, and the team of experts Bellingcat identified a fragment of a munition, which was in the convoy: it was the tail of high-explosive bombs ofab-250-270 – unguided bombs of Soviet or Russian origin.

Meeting in Normandy format will be held in Berlin tomorrow. About it in telephone conversation have agreed, Petro Poroshenko, Angela Merkel and Francois Hollande. About the participation in negotiations of Vladimir Putin on the website of the Ukrainian President is not mentioned. But, according to the representative of the German government, the head of the Kremlin in Germany still going.

In the end, the British foreign Minister, Boris Johnson has warned Russia that it risks becoming a pariah if it continues to bomb civilian targets and called on to impose on Moscow additional sanctions. And Secretary of state John Kerry said that the U.S. is already considering the possibility of introducing restrictive measures against Russia because of the aggravation of the Syrian crisis.

The Frankfurter Allgemeine Zeitung reported that on 20 and 21 October, the European Council will discuss the possibility of imposing new sanctions against Russia. In addition to the “Ukrainian” can enter the “Syrian” – against the Russian aviation and defense industry. For tougher sanctions against Russia supports German Chancellor Angela Merkel and US President Barack Obama has promised to support it.

At the same time, Putin is caught in a scandal derailed a trip to Paris. In the Kremlin explained that the visit was cancelled due to “events, dropped out of the program.” It turned out that Hollande refused to allow Russian President at the opening of an Orthodox temple in the French capital, as the festive events of “no time”: he was going to concentrate in the conversation with the Russian leader on the events in Syria.

“The Russian leadership creates the impression that the country is approaching a large-scale war with the U.S.”

These events gave rise to journalists, experts and politicians to Express new phase of the cold war. A representative of ABC News in Moscow, Patrick Rivelli has seven gathered evidence that the Russian leadership creates the impression that the country is approaching a large-scale war with the United States. Among the items, including the injection through the media which carried out surveys among the Russians, are they ready for nuclear war, and I advise everyone to know where the nearest bomb shelter.

Further proof of the alleged preparation of Russia to the war was the holding of large-scale civil defence exercises with the involvement of 40 million people across the country, which provide for actions in a nuclear war.

Also, Russia has deployed missiles capable of carrying nuclear warheads, in Kaliningrad region in response to the “missile shield of the USA in Eastern Europe.”

“This meeting is mandatory on the eve of the European Council”

The Minister of foreign Affairs of Ukraine Pavlo Klimkin

Such actions are not encouraging in the rapid resolution of the conflict in the Donbass nor Ukraine, nor the leaders of France and Germany. After Poroshenko does not expect any breakthroughs from the meeting “channel four” Minister of foreign Affairs of Ukraine Pavlo Klimkin.

In his opinion, this measure will be a test, you can continue to put pressure on the Russian leadership in the execution of the Minsk agreements.

“It is obligatory on the eve of the European Council, which will discuss the issue of relations with Russia. Therefore, in this context it is very important”, – said the Minister.

However, the Minister warned that any expectations from tomorrow’s event Ukraine does not have.

“A miracle from tomorrow’s meeting should not be expected”

“With certainty we can say that a miracle from tomorrow’s meeting should not be expected. But to say it is always necessary, even when significant differences of opinion”, – said the initiator of the meeting Angela Merkel.

However, the part of “Norman format”, not hiding the skeptical sentiment, you’re going to Berlin in the hope of not only Ukrainian, but also the Syrian crisis.