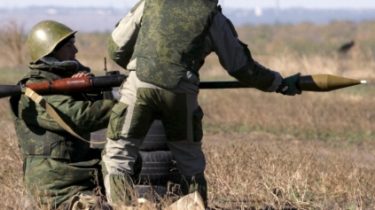 It happened in Lebedinsky as a result of enemy artillery fire.

In the area of ATO for the past day, October 18, one Ukrainian military was lost, one more got wounds.

This was announced by the speaker of the Ministry of defence of the ATO Andrei Lysenko.

“For the last days due to combat action one Ukrainian soldier killed, one wounded – this happened in Lebedinsky as a result of enemy artillery fire,” – said the speaker.

It is noted that the past day in the Donbas Russian-occupation forces 57 times opened fire at positions of the Ukrainian defenders.

On the Mariupol direction was recorded 44 provocations against ATO forces. Militants fired machine guns of large caliber, rocket-propelled grenades and small arms to strengthen the Armed Forces of Ukraine near Talakivka, Pavlopolya, Granite, Krasnogorovka and Marinka, and on Water, Lebedinsky and Shyrokyne times was applied fire cannon artillery of calibers 122mm and 152mm, mortars of 82mm and 120mm caliber.

On Lugansk the direction from the enemy occurred on 10 cases of violation of ceasefire regime. On the Ukrainian positions, the enemy opened fire in the areas of Popasnaya Walnut and rocket-propelled grenades, machine guns and small arms, and in Novozvanivka and the Crimean division of the Ukrainian Armed Forces were fired from mortars 120 caliber.