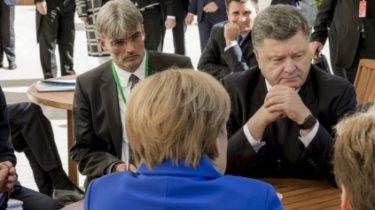 President of Ukraine Petro Poroshenko has arrived in the residence of the German Chancellor, where they will play with Angela Merkel and President of France Francois Hollande.

Now the three countries ‘ leaders expect Russian President Vladimir Putin, he, as always, is late. Expect his arrival around 20:00 in Kiev.

See also: Kisses and handshakes: Hollande arrived at the residence of Merkel for the “channel” meetings

Recall that the purpose of the meeting “channel four” in Berlin to seek Ukraine progress with the special status of Donbass.

This was stated by Minister of foreign Affairs of France Jean-Marc Ayrault.

The French foreign Minister noted that “the Norman four” will require from Kiev “detailed obligations regarding the “status of Donbass” and of the calendar of elections in the occupied part of the region.