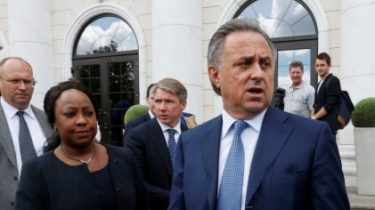 At the same time as the Minister of sports proposed the candidacy of Pavel Kolobkov.

Prime Minister of Russia Dmitry Medvedev presented to Vladimir Putin a nominee of Vitaly Mutko on a post of the Vice-Minister for sports.

He will also oversee the issues of sport, tourism and youth policy, at the same time as the Minister of sports proposed the candidacy of Pavel Kolobkov, Interfax reported.

It is reported that Medvedev informed the President about the justification for the establishment of the post of Deputy Prime Minister. Putin agreed with Medvedev’s proposals.

The Prime Minister instructed the government staff to prepare the appropriate documents for inclusion in the President’s administration and further signing by the head of state.

Recall that last week President Vladimir Putin announced that the government will be Deputy Prime Minister who will oversee a range of issues, including sport, tourism and youth policy.

We will remind, the Minister of sports of Russia Vitaly Mutko became famous for his “rhetoric,” in English. One of his “hits” is a funny phrase: “Know criminality John rush”. The speech of the Minister has ridiculed nick Network.