Bank of the Russian Orthodox Church can “burst” 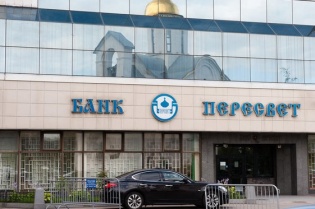 Bank of the Russian Orthodox Church can “burst”

“Peresvet” has introduced a temporary administration.

Today, 21 October, and six months in the Russian Bank “Peresvet” has introduced a temporary administration. It takes 41 place in Russia in terms of assets (about 200 billion rubles, most of which are loans to companies). Almost half of the shares “Peresvet” belongs to the Russian Orthodox Church, a quarter – chamber of Commerce and industry of the Russian Federation.

The powers of the Executive bodies of the Bank is completely suspended. Now, the interim administration should check all the documentation and conduct a survey of the financial situation, “Peresvet”.

“A moratorium on satisfaction of requirements of creditors of the Bank is insured. Payments to depositors of JSCB “Peresvet”, including individual entrepreneurs, to start no later than 14 days from the date of the moratorium. The order of payment of insurance compensation will be determined by the state Corporation “Agency for deposits insurance”. The Bank of Russia is holding consultations with shareholders and largest creditors of the Bank “Peresvet” to determine the future prospects of the activities of credit organizations”, – explained in the Central Bank of the Russian Federation.

We will remind, the Russian Orthodox Church also has income from investments in the import of vehicles, construction, restaurants and hotels, wholesale and retail trade, agriculture and food production. According to estimates RBC, controlled by the Russian Church enterprise a few years ago gave her 600 million roubles a year, and the value of assets was about 2.3 billion.

At the beginning of this year, “busted” Russian commercial “Ergobank”, in which the accounts have been opened 61 organizations subordinated to the Russian Orthodox Church.