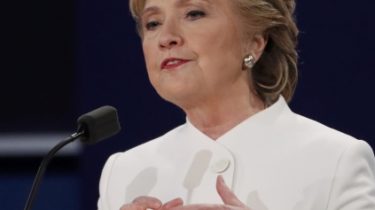 “I don’t know Putin, but he said nice things about me,” he said in response to trump.

The candidate in US presidents from Democrats Hillary Clinton said that trump supports the Russian cyber attacks on America.

About it write “news”.

The candidate in US presidents from Democrats Hillary Clinton during the third televised debate in Las Vegas said that her opponent is Donald trump supports Russian cyber attacks on America and is a puppet of the Kremlin.

In response, trump said that the US and Russia should be friends, and Clinton to Putin’s just jealous because he’s smarter than her.

“I don’t know Putin, but he said nice things about me,” said trump.

He added that if Russia and US went together and chased the IG, it would be good, reports “RIA Novosti”.

Also, in his opinion, the problem of the US and Russia is that Putin has no respect for the current occupant of the White house Barack Obama or Hillary Clinton.

See also: the White house hinted on sanctions because of attacks by Russian hackers

Recall that the candidate in US presidents from Republican party, Donald trump and his rival from Democratic party Hillary Clinton again don’t shake hands at the beginning of the debates.

Additionally, in early September, during an interview for Bloomberg Russian President Vladimir Putin “disown” the implementation of hacker attacks on the databases of the US Democratic party, they say, he did not know about this. And by the way, said that people should be interested in not the fact of burglary, and the contents of the information declassified bases.

In the Czech Republic detained a Russian hacker, who is wanted in the United States

He had dinner at the Prague restaurant and was so surprised by the appearance of law enforcement authorities that he lost consciousness after he was handcuffed. What exactly accuse 29-year-old criminal, not talking. In Washington that Russian hackers blamed in attacks to servers of the democratic party and other crimes. Now detained in the Czech Republic men prepared for extradition to the US.