In the US, trump and Clinton again shook hands at the beginning of the debates 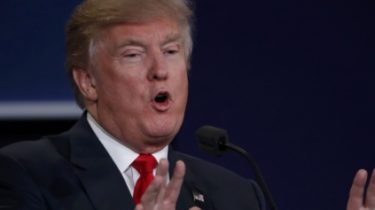 In the US, trump and Clinton again shook hands at the beginning of the debates

The U.S. presidential election will be held November 8, 2016.

In Las Vegas launched the third and final debate of candidates in US presidents between Donald trump and Hillary Clinton.

This is reported by “Izvestia”.

The candidate in US presidents from Republican party, Donald trump and his rival from Democratic party Hillary Clinton again shook hands at the beginning of the debates.

One of the first questions asked in the debate was the question of the relation of candidates to abortions.

Recall at the second debate, trump and Clinton shook hands at the beginning and said good-bye hand at the end. Trump said that in case of his coming to power, Clinton would be sitting in jail.

The U.S. presidential election will be held November 8, 2016.

Recall that the support of the representative of the Democrats in the us presidential election – Hillary Clinton – has increased to 48 percent. Obviously, the opinion of voters was influenced by the scandal that arose over the words of Donald trump about the treatment of women.

When this rating is controversial representative of the Republicans is 41.9%.

The gap between the candidates has increased, and the greatest losses a rating of trump suffered among women aged 45 years or more.

Previously, the newspaper The Washington Post has published a recording of the conversation of the vulgar tramp with showman Billy Bush. During her TV host laughing with stories trump about his attempt to sleep with the TV presenter NBC. Subsequently, several women stated that sexual harassment on the part of trump.

Broadcast on all the country news from the University of Nevada, located in Las Vegas. In the city, a political show was already prepared. Bookmakers who would accept bets on the winner only on the Internet, said that among gamblers leads Clinton. Agree with them and sociologists.