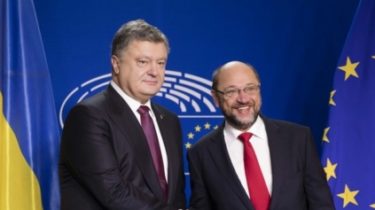 The head of state spoke about the results of the meeting in Normandy format, which took place yesterday, October 19 in Berlin.

It is noted that the sides discussed the need to continue the policy of sanctions against Russia to restore territorial integrity of Ukraine. They also discussed the possibility of strengthening the restrictive measures against Russia in the context of human rights violations in the Crimea.

“President Poroshenko praised the consistent support of the European Parliament of the Ukrainian state, countering Russian aggression and the continuation of reforms”, – is spoken in the message.

“In the European Parliament there is a stable majority for the introduction of a visa-free regime with Ukraine,” – said Martin Schulz.

The parties also agreed that the Association Agreement should be ratified immediately.

In addition, Petro Poroshenko and Martin Schulz discussed the progress of reforms in Ukraine. The President of Ukraine urged the European Parliament to accelerate the adoption of additional Autonomous trade preferences for Ukraine.

We will remind, in the night of 20 September in Berlin ended meeting of leaders of the countries-participants of the “Normandy four”. For nearly five hours talking policy. all that was important, what was agreed by the heads of state find out the link.