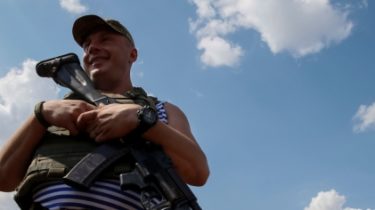 Rubber eyecups, buttons, and other details not as good as the factory.

In the river ex-ATU fighter Sergey Shvets personally make soft parts for cameras just at home in the kitchen at a time when the budget for the army lay in the billions, and, it seemed, the army should have everything you need. This is stated in the story TSN.Ranok.

Rubber eyecups, buttons, and other details not as good as the factory. According to the military, on the front of the soft parts of optical instruments deteriorate the fastest. New or expensive to buy, or even no where.

So, soon the first batch of restored thus thermal imagers go to the front.

Read also: Ukrainian military has built the longest in the history of APU pontoon across the Dnieper

We will note, ex-ATU fighter Sergey Shvets has served two years, but was discharged due to wounds. Approached the volunteers with a request to make the soft parts, and he succeeded.

We will remind, the Ukrainian family for more than two years looking for the missing in the ATO tank. Two years and two months after the brutal fighting at Stepanovka no news about Sergeant of the 30th mechanized brigade of Yaroslav Antonyuk. First, it brought in a list of prisoners of war, then enlisted in the missing, but the family still believe that their husband and father alive.

Warrior makes them right at home in the kitchen. Rubber eyecups, buttons, and other details not as good as the factory. At the front, says the military, it is soft details of the optical devices deteriorate the fastest. To purchase a new expensive, but most often just anywhere.