“Norman meeting” and the debate between Clinton and trump. Five things you might oversleep 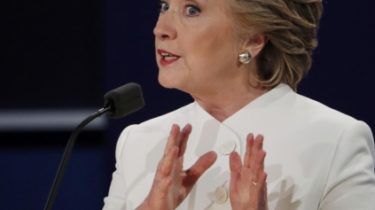 “Norman meeting” and the debate between Clinton and trump. Five things you might oversleep

1. On the night of 20 October in Berlin ended meeting of the leaders of the participating countries “channel four”. “Norman four” agreed to establish a road map of implementation of the Minsk agreements – this document must contain the steps to be performed all items of the Minsk-1 and Minsk-2. Above road map will work the foreign Ministers of the countries “Norman Quartet” – the draft document should be ready before the end of November. While Angela Merkel said in Berlin that was created version of the roadmap with a large number of inconsistencies. Read more→

2. In the United States hosted the final rounds of the televised debates of presidential candidates Hillary Clinton and Donald trump. During the debate, Clinton and trump talked on a variety of topics. Both candidates had two minutes to answer and review the answer of the opponent. Read more→

3. The leaders Vladimir Putin, Angela Merkel and Francois Hollande have concluded negotiations on the Syrian settlement. The leaders of Russia, Germany and France spoke an hour and a half behind closed doors. The situation in Aleppo, Syria has significantly escalated in recent years. The West accuses Moscow and Damascus in airstrikes on civilians and the positions of the armed opposition. Read more→

4. The President of Ukraine Petro Poroshenko explained the presence during negotiations of the leaders of “Norman Quartet” in Berlin made by the European Union in the sanctions list of the assistant to the President of Russia Vladimir Putin, Vladislav Surkov, one-time issue him a visa. Read more→

5. The US spotted an unsuccessful attempt of North Korea to launch a ballistic missile. The missile that was launched from the outskirts of the city kusan, probably belongs to the class of medium-range missiles “Musudan”. Read more→