Fighters concentrated the majority of attacks in the area of Mariupol. Chronicle of the ATO 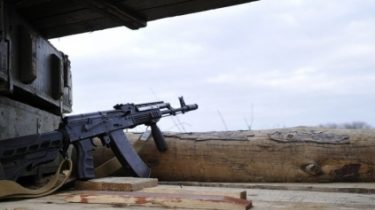 Fighters concentrated the majority of attacks in the area of Mariupol. Chronicle of the ATO

For Saturday, the Ukrainian military has recorded 12 enemy attacks.

From the beginning of day Oct 22, fighters of 12 times fired on positions of Ukrainian military in the ATO zone in the Donbas. Most of the attacks – nine – was recorded in the district of Mariupol, Donetsk region.

This is stated in the summary of the press center of the ATO headquarters as of 18:00 Saturday, October 22.

On the Mariupol directionand near Maryinka and Gotovogo militants fired machine guns, rocket-propelled grenades and small arms. Near Shirokino and Talakivka in the direction of the Ukrainian units opened fire, enemy snipers, and in Pavlopole provocations against ATO forces, the militants carried out using tube artillery of calibre of 152 mm and 120-mm mortars

On Donetsk the direction, besides mortars, the militants twice targeted on the plant with machine guns, grenades of different systems and small arms.

In Luhansk region the militants once fired from 120-mm mortars on the defenders of the Crimean.

Earlier it was reported that the militants have used “Grad” on the Lugansk direction.