Hollande does not exclude the difficult negotiations on Brexit 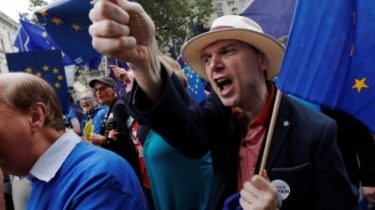 Hollande does not exclude the difficult negotiations on Brexit

If Theresa may wants to complicate the process for Brexit, the negotiations will also be complex.

If the Prime Minister of great Britain Teresa may wants to complicate the process of withdrawal from the EU, the negotiations on this process will be too difficult, said President of France Francois Hollande.

“I talked about this quite clearly. If Theresa may wants to complicate the process for Brexit, the negotiations will also be complex,” – said Hollande. Answering the question about the role of Mei on the summit, the French President said that she arrived as a full member of the European Council.

“She has not activated article 50 (Lisbon Treaty – ed), so she is a party to all discussions,” – said Hollande.

Article 50 of the Lisbon Treaty provides that any member country of the EU can decide to leave the European Union. To implement this law, the state shall notify Brussels of its intention, followed by negotiations on the procedure of exit from the Association.

Representatives of business groups and scientists argue that the Prime Minister has no right to start the procedure of exit from the EU. This, lawyers say, requires the consent of Parliament. He may oppose it. Lawyers say that the results of the referendum they are unquestioned, however, the voters ‘ opinion is only Advisory in nature.