The militants used heavy weapons in all directions. Digest ATO 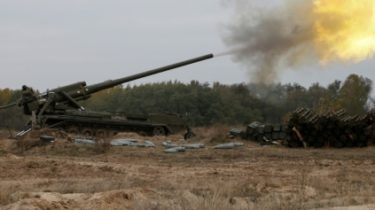 The militants used heavy weapons in all directions. Digest ATO

Over the past day militants 39 times opened fire at positions of the Ukrainian defenders. This is stated in the summary of the press service of staff ATO as at 6.00.

So, on the Mariupol direction fighters 18 times broke “the silence mode”. Near Maryinka and Pavlopol occupants fired guns of large caliber, rocket-propelled grenades and small arms, in Krasnogorovka and Cherokee – mortars caliber 82 mm.

In the Water the enemy fired with cannon artillery 122 caliber and mortars caliber 120mm.

See also: the Military gave the “DNR” the body of the killed militants, Russians

Also on Lugansk the direction fighters of 12 times broke “the silence mode”. In the direction of Novoaleksandrovka and Stanytsia Luhanska the enemy fired at ATO forces positions from rocket-propelled grenades, machine guns and small arms in the Crimea – from arms BPM. In Novozvanivka militants fired from cannon artillery 122mm, and the Holy Trinity – from jet systems of the BM volley fire-21 Hail.

In addition, at the direction of Donetsk occurred on 9 attacks. In Lugansk militants used against the Ukrainian soldiers mortars 82 caliber machine guns, grenade launchers, and fire BMP. In the districts of the Town, Verhnetoretskogo attacks lasted from arms of the tank, mortars 82 mm and 120 mm.

Recall that the line of demarcation in the Donbass has changed with the opening of the KPVV Mallorcan. The inhabitants controlled by terrorists “DNR” territory already dissatisfied with his work.