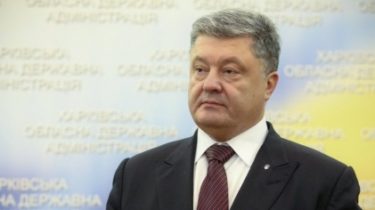 High-ranking officials and other officials have to submit declarations until the end of October.

The President of Ukraine Petro Poroshenko promised to fill e-return of income before the end of next week.

The head of state said in an interview to Ukrainian TV journalists, answering a question of leading the program TSN.Week Alla Mazur.

See also: Half a billion hryvnia to accounts, the boat and three apartments. Poroshenko announced its Declaration

“16 years I’ve filled all the declarations and everything is open. Unlike many of the leading fighters against corruption. Now the form of an electronic Declaration is actually imperfect. And I also don’t like like anyone who fills. But this is not an example to her not to fill. And during these nine days (the interview took place on Friday, October 22) the President of Ukraine Petro Poroshenko in all circumstances the Declaration of the fill and release”, – assured the head of state.

We will remind, a week before the deadline as Sunday lunchtime, October 23, the annual electronic Declaration filed 21901 (43%) officer, of which only 31 MP.

The full interview with the President of Ukraine Petro Poroshenko watching on Sunday, 23 October at 23:00 on TV channel “1+1”.

Petro Poroshenko says that the position had not changed. And when I said earlier that the elections will be only after the control over the border, it meant the control of the OSCE. “Our military will come to the border with Russia on the second day after the election,” confirmed the details of the agreement, the President.