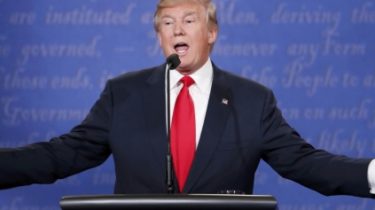 The candidate in US presidents from Republican Donald trump promised to “shock the world” their victory, just as the referendum in the UK was won by the supporters of the output of the United Kingdom from the European Union.

It is reported by The New York Times.

“We will win, we shokiruet the world,” said the billionaire, adding that it will be a victory in the style of “Brexit-Plus”.

Now, according to polls, trump is inferior to its main rival, the Democratic candidate Hillary Clinton. The United States presidential election will be held on 8 November.

For them it hardly probable not last chance to convince the voters who of the contenders for the highest office in the country the best. So talking about the most sensitive for Americans things. Was discussed in the debate about abortion, which if trump is elected President, will no longer be a private matter of every woman, and the mandatory wall with Mexico, and on the further relations with NATO, on state debts, the high court and, of course, about the fight against ISIS.