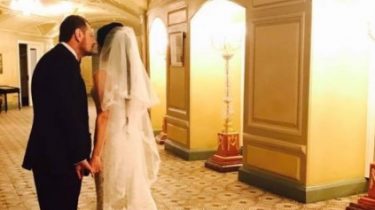 The MP got married for the third time.

The controversial radical Igor Mosiychuk married to a police Lieutenant. Younger self of 10 years bride MP hid for two years and only now know who she is, says the story TSN.19:30.

The couple met two years ago in the restaurant. She is a native of Odessa, is a lawyer by profession, educated at Simferopol, until now, never been married, has no children. Mosiychuk said that his wife – a former police officer, a parishioner of the UOC of the Moscow Patriarchate, the internationalist, who supported him in difficult times. “She is always with me. In joy and in trouble… When I turned away almost everything, she stuck around… Never told me he loved me, but made sure that I understood it,” admitted the Deputy.

The MP from the Radical party to the last secret of who his fiancee. And only after the wedding it became known that the bride Mosiychuk, a former police Lieutenant, 34-the summer inhabitant of Odessa by the name Vladlena. Wedding photos posted in social networks colleague of the Deputy, Andrey Lozovoy. But the young not visible in the photo, with the signature willow jokingly calls her a “criminal power.”

The wedding was walking in a country restaurant in ethnic style. Witness, the party Andrei Lozovoi, the newlyweds gave half the parliamentary salary – 10 thousand hryvnia. In addition to the deputies, there was the third President Viktor Yushchenko and speaker of Parliament Andriy Parubiy. Learned how to TSN, the honeymoon, the couple will not be.

As previously reported, for the sake of his sweetheart before marriage , he lost about 100 kg of weight. With his new wife politician wants to have two children. The ceremony of marriage, he’s wearing a black suit and red tie, and the bride wedding dress with long train.