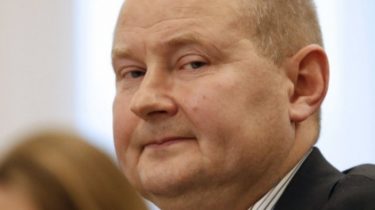 The Bureau now decide whether to declare the bribe taker in the international search.

Ukraine appealed to the Interpol to announce an international arrest warrant convicted of bribing a judge-fugitive Nicholas Chaus.

This was stated by the head of Ukrbyuro of Interpol Basil Captivity, writes ЛІГА.net.

“We received a request from the NEB, we adapted and sent to the Central office of Interpol is located in Lyon. The Interpol General Secretariat is examining this issue,” he said.

Slavery also added that appropriate action needs to go through certain procedures, but no response yet.

We will remind, the Solomensky district court of Kiev granted permission for the detention of Chaus. 9 August judge of the Dneprovsky district court of Kiev Nicholas Chaus exposed for receiving a bribe in 150 thousand dollars. Corruption and money the judge put in a glass jar. The head of the NABOO Sytnyk at a joint press conference with the head of SAP Nazar Holodnenkim told that the judge knew about the surveillance of him and therefore demanded to increase the amount of bribes from 100 to 150 thousand dollars for the risk. Announced at the interrogation in this case Chaus has not appeared. People’s Deputy Borislav Bereza said that the judge ran away and is hiding from investigators.

September 6, during meeting of the Verkhovna Rada deputies adopted the decision on the consent to detention and arrest of the Leadership, which, according to the anti-corruption Prosecutor nazara Golodnitsky, was in annexed to the Crimea.

Later, the Director of the National anticorruption Bureau of Ukraine Artem Sytnik declared that a judge may be in Belarus.