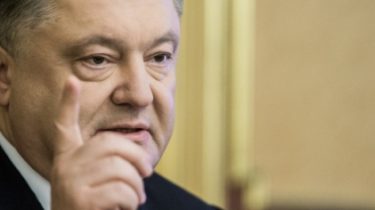 The President hopes that the Ukrainian military will come to the border with Russia on the second day after the election.

Whether Ukraine has changed its negotiating position in relation to the Donbass? What did the output of the press after the statements Klimkin and Eliseeva? The President of Ukraine Petro Poroshenko says that the position had not changed. And when I said earlier that the elections will be only after the control over the border, it meant the control of the OSCE. Ukrainian military will come to the border with Russia on the second day after the election, confirmed the details of an agreement the President in an interview to Ukrainian TV journalists, among whom was the host of the program TSN.Week Alla Mazur.

The success of Berlin, according to Poroshenko, in the first place that Europeans had dispelled the last doubts about sanctions against Russia. That is, they are convinced that sanctions are necessary. There are discussions on which term to enter for six months or a year.

“The question to continue or not to renew sanctions against Russia, if Minsk will not be implemented, it is not even discussed. We have achieved unity with our European partners. During a meeting in the “Normandy format” on 19 October in Berlin have agreed to prepare by the end of November the “road map” implementation of the Minsk agreements. In the near future to meet the diplomatic advisers of the leadership of the countries “Norman Quartet”, and then the foreign Ministers to prepare the next summit, where until the end of November, must be approved “road map” – said Poroshenko.

If this does not happen, then the Council of the EU in the member countries of the European Union will have every reason to continue and strengthen sanctions.

“The Ukrainian side has made a clear proposal to extend sanctions on six months, and the entire 2017. Now this issue is being discussed among the countries-members of EU”, – stressed the head of state.

Read also: Poroshenko commented on media reports that he yelled at Putin

Poroshenko also assured that “there are no secret agreements in the “Normandy format” was not discussed. It’s not pricesno style for European policy. It is in Moscow to negotiate, to sign a secret agreement and then years to publish them. All agreements of Minsk in the form of a set of measures Protocol of 5 September, of the Memorandum is clearly disclosed. In Berlin during the meeting were presented by Ukrainian, French and German projects of the road map, which should include a comprehensive ceasefire, ensuring the withdrawal of heavy equipment, unobstructed access of OSCE to the entire occupied territory, including the border, unimpeded work of drones and other technological tools in order to fix the ceasefire, release of hostages and unimpeded access of the International Committee of the red cross to inspect the conditions of detention of hostages and to facilitate their release.”

According to the head of state, “the package security includes the completion of the withdrawal of troops at three sites in the Gold, Petrovsky, the village of the Luhansk. To refute any lie, with any piece of the village Ukraine. Ukraine removes one observation post. On the side of the representatives of the Russian terrorist troops removed three posts. Four more of the following areas, where there should be the mode of breeding. One of these four areas, I clearly stated during a meeting in the “Normandy format” must be Debalcevo. I emphasize that road map includes the implementation of all the Minsk agreements, including a Protocol of 5 September 2014, the Memorandum of 19 September 2014 and a package of measures of 12 February 2015, which gives grounds to insist on the demilitarization of Debalcevo”.

The full interview with the President of Ukraine Petro Poroshenko watching on Sunday, 23 October at 23:00 on TV channel “1+1”.

Petro Poroshenko says that the position had not changed. And when I said earlier that the elections will be only after the control over the border, it meant the control of the OSCE. “Our military will come to the border with Russia on the second day after the election,” confirmed the details of the agreement, the President.