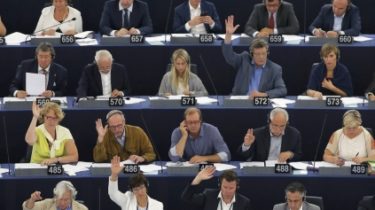 For this decision is the absolute majority in the European Parliament.

The European Union will decide on the introduction of visa-free regime with Ukraine until November 24.

“I am confident that the documents on granting Ukraine a visa-free regime will be signed and ratified by the European Parliament, there is no doubt. Can say even, to a date – until 24 November because November 24 is the summit Ukraine-EU, and we agreed that this summit all the documents will be ready,” he said.

Poroshenko said that the EU would take btvs before, but the delay was caused by the production mechanism for suspending the visa-free regime, and is not associated with Ukraine, and with countries in the Middle East.

“We now have assurances that our negotiations has accelerated consideration of this mechanism for the suspension – it was about a dispute between the powers of the European Parliament and the powers of the European Commission. I very much hope that the understanding will be found. Next week will be voted for the suspension will be a compromise and Ukraine will receive the decision on visa-free regime until November 24,” – said the head of state.

Security, cooperation and visa-free regime. About this Petro Poroshenko spoke to the leaders of the EU and NATO in Brussels. The result of the visit of the President to the EU was a bold statement that in November, Ukrainians will be able freely to travel around Europe.