The culprit bloody accident near Kiev, worked in a taxi 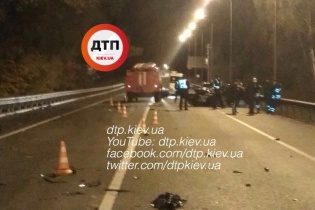 The culprit bloody accident near Kiev, worked in a taxi

The driver could carry inadequate passengers in the fatal trip.

Near Kiev the car jumped into the oncoming lane and rammed a van. As a result, the driver and two 20-year-old passengers died at the scene of an accident, says the story TSN.19:30.

Of those who were in the car, survived only two men, 24 and 29 years old. Their condition is very complicated. “In a very serious condition hospitalized in the intensive care unit of our hospital. At the present time to judge the future prospects difficult. Forecasts we are currently not able to do because the condition remains dire,” admitted chief of trauma Irpen hospital Peter Ksenich.

Passengers of the minibus was seriously injured, although from blow that turned over and was badly damaged. In the cabin of the wrecked car was found a bottle of beer. Who had consumed alcohol, has not been established. However, it is already known that the driver of the car lived in the town of Borodianka near Kiev, and from time to time moonlighting that taksovat. “We’ll have to find out in what state was the driver in what state, where he picked up the passengers and prompting the driver to perform such a maneuver – he rode some sort of barrier, or, possibly, the cabin passengers did,” he voiced, the speaker of the regional police Nikolai Zhukovich.

Two in intensive care. Night on the Warsaw highway near Kiev passenger car popped up on the counter and crashed into a van. Of those who were in the car, survived only two men, 24 and 29 years. Two 20-year-old passengers and the driver died on the spot. Passengers of the minibus was seriously injured, although from the blow, he turned and well hurting.