In Kiev, the man tried to shoot a COP 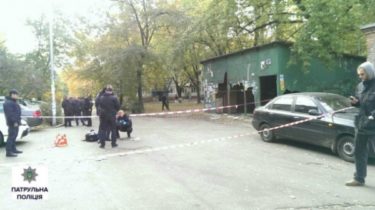 In Kiev, the man tried to shoot a COP

55-the summer local was detained.
Today, October 24, in Kiev the unknown man tried to shoot at the patrol.

About this on his page in Facebook informs the Patrol police of Ukraine.

It is noted that about 11 a.m., a patrol crew arrived on the street Kurnatowska – according to the Complainant, someone had replaced the lock on the leased premises.

Arriving at the scene, the inspectors talked with 55-year-old local resident when he suddenly got the subject similar to the gun, and pointed it in the direction of the patrol.

“One of the inspectors realized immediately: applied to the man in unarmed combat, took his arm to the side and he fired in the asphalt,” – said in the message.

The shooter was detained. The police reported that previously, he had signs of intoxication.

On a scene caused it is investigative-task force of the Dnieper police Department.

We will remind, in Kiev, police detained the room thief who while fleeing had shot at people. In particular, local residents noticed two suspicious persons in the entrance, called the police and tried to detain them, one of the attackers began to shoot (pre – of the device for shooting rubber bullets).