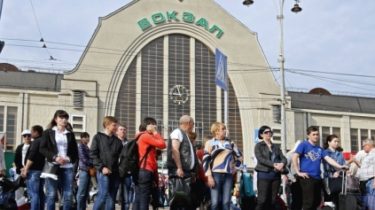 Enterprises of PJSC “Ukrzaliznytsia” now recognized as only 2.4 million UAH additionally assessed by the tax authorities of funds by results of checks.

In “Ukrzaliznytsia” has responded to accusations of the State fiscal service of tax evasion and stated that this information is not correct.

This was reported in the press-centre of PJSC “Ukrzaliznytsia”.

“The publication of unverified information damages the reputation of PJSC “Ukrzaliznytsia”, which is actually one of the largest taxpayers in Ukraine”, – stated in the message.

In the press center also noted that the firm can not accept the fact of non-payment of accrued taxes in the specified DFS volume, particularly in the absence of documentation for 2013-2015 on a number of rail industry.

“In particular, in the absence of a significant number of primary documents is challenged the objectivity of the assessments 625 million tax on the activity of enterprises of the Dnieper railroad, located in the Crimea”, – added in Department of the company.

It is noted that the enterprises of PJSC “Ukrzaliznytsia” now recognized as only 2.4 million UAH from UAH 2 billion assessed tax means the results of inspections of activities in 2013-2015, the state of the rail industry, which are under liquidation, the remaining additional taxes are currently being appealed by the industry in an administrative or judicial procedure.

In “Ukrzaliznytsia” said that the company is one of the largest taxpayers in our country. Thus, over half of 2016 to the state budget of Ukraine and the trust funds of PJSC “Ukrzaliznytsia” has paid almost 7 billion UAH, and in General, this year the community plans to pay about 14.8 billion UAH of taxes.

“Even in difficult economic conditions PJSC “Ukrzaliznytsia”, the official publication of the DFS, is one of the 20 largest taxpayers in Ukraine”, – added in UZ.

We will remind, today, on 24 October, the State fiscal service of Ukraine has finished checking the “Railways”, with the result that it was established tax evasion of more than UAH 1.5 bn.