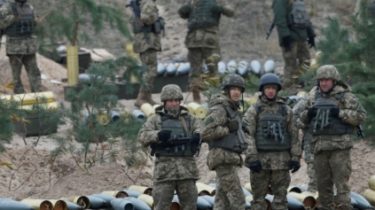 in General, the enemy 40 times broke “the silence mode”.

For the last days fighters 40 times opened fire at positions of the Ukrainian defenders. This is stated in the summary of the press center of staff ATO as at 6.00.

So, in the direction of Mariupol, there were 24 cases of violations of “silence mode”. In Gnutovo, Water and Granite militants carried out attacks against the forces of anti-terrorist operation of guns of large caliber, rocket-propelled grenades and small arms, and in areas Krasnogorovka, Marinka, Pavlopol the enemy opened fire from antiaircraft guns, machine guns, mortars caliber 82 mm. Near Shirokino shelling of the fortifications of the Armed forces of Ukraine continued from mortars of calibers of 120 and 82 mm, grenade launchers, small arms.

See also: In defense of Marinka was a whole family of Kharkiv

Also at the Donetsk direction there were 13 cases of opening fire on the Ukrainian military. The defenders of the Luhansk shelling continued with machine guns. In the area of Zaytsevy occupants have violated the “silence regime” mortars 120 caliber, grenade launchers, machine guns and small arms, and in Avdiivka, in addition, the militants used against Ukrainian soldiers cannon artillery 122mm.

In addition, the direction of Lugansk recorded 3 provocations against ATO forces. In the area of Novoaleksandrovka militants used machine guns, mortars caliber 82 mm, and in the Village of Lugansk Ukrainian soldiers opened fire with enemy snipers and grenade throwers.