Statements Poroshenko and details of murder of collectors. Five things you might oversleep 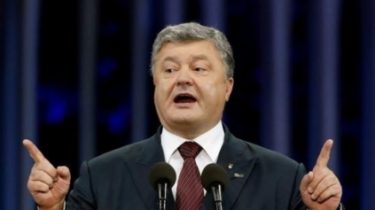 Statements Poroshenko and details of murder of collectors. Five things you might oversleep

1. President of Ukraine Petro Poroshenko gave interview to Ukrainian TV channels, including “1+1”. The Ukrainian head of state told about the agreement “Norman Quartet”, called unacceptable alternative to the Minsk agreements and explained why debaltseve must be demilitarized. See the full interview with Poroshenko on the website Tsna. Read more→

Read also: If Russia does not fulfill the Minsk agreement, the EU will extend and strengthen sanctions – Poroshenko

2. Security officials in St. Petersburg detained two Ukrainians, one of whom is in the international wanted for murder in 2015, three collectors in the Chernihiv region. Murder collectors occurred on October 23, 2015. As reported, burned near Chernigov collector car transported about 15 million hryvnia. Read more→

3. The candidate in US presidents from Democratic party Hillary Clinton is ahead in popularity among the voters of his Republican opponent Donald trump at 12%. For Clinton ready to vote 50% of all voters trump – 38%. Now this is a record for Clinton, and the lowest rate for trump. Read more→

4. The Syrian army and the Lebanese movement “Hezbollah” has moved into large-scale offensive against militants in the South of Aleppo. They took control of the height, where part of the air defense and destroyed several enemy tanks. Now the problem is to cut off supply routes to the area occupied by the extremists. Read more→

5. In California there was a terrible accident, in which 13 people were killed and 31 were injured. The accident occurred on Sunday at 5.17 a.m. local time near the city of palm springs- a tour bus crashed into a truck. Read more→