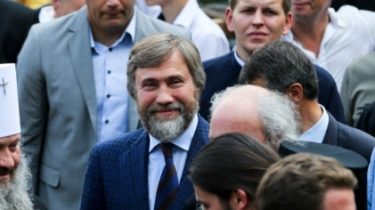 Policy suspect in the attempted removal of Metropolitan Volodymyr.

Ukraine’s Prosecutor General will submit to the Parliament the representation of deprivation of the mandate of a national Deputy of Ukraine Vadim Novinsky.

This was during a press conference said the Prosecutor General of Ukraine Yuriy Lutsenko, the correspondent of TSN Olga Vasilevskaya.

According to him, the politician is suspected of attempt of removal of the Metropolitan of the UOC-MP Vladimir.

“We’re really at the finish line in the case in which Yanukovych suspected of illegal pressure on the Ukrainian Orthodox Church with the purpose of removal from office of the late Metropolitan Vladimir. In this case is suspected as people’s Deputy Vadim Novinsky” – said Lutsenko.